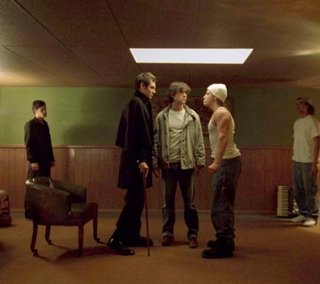 Under the flimsy rubric of "Hey, this is a culture blog," I must pause from not reviewing all the opera I'm not seeing these few weeks to urge you out of your houses, should you happen to live in a major coastal city with art houses that premiere relatively small indie flix, to go see Brick. It's...well, it's a high school film noir. In a formulation I think we've all grown to hate, I suppose you could say it's Heathers meets The Big Sleep, only no, something better than The Big Sleep...maybe Double Indemnity. The film takes up this ridiculous task of genre-fuck and does not blink. Some performances are more assured than others, but all within the range of making it work. A special Maury Thinks you're Swell and maybe kind of wants to Do You award* goes to Joseph Gordon-Levitt, a sitcom star made very good, in fact seemingly destined for indie royalty status. [Edit: story about JGL being offered the role in Dazed and Confused deleted when MD realizes he has things backward ad probably it's that Wiley Wiggins was offered/turned down Third Rock. It's a funhouse of mistakes, folks!]

I couldn't ruin the plot for you if I wanted to, because really they did take a page from The Big Sleep, in terms of almost un-navigable complexity. But it occasions all manner of sly talk, occasionally also oblique to the point of incomprehension, but quite nearly musical in composition. And interspersed with hilarious trivialities of teenage life. Gordon-Levitt, most of all, manages to put over the poetry of an idiom that died out decades before his birth. The whole thing reminded me a little of Baz Luhrmann's Romeo + Juliet, so comparably, thoroughly vanished is the language used. In both films, some of the young actors sound a little like they're reading lines phonetically, but in Brick the majority seem to have done their homework, to have gotten the rhythm of things worked sufficiently into muscle memory that they can deliver with spontaneity and embellish with nuance. Meagan Good and Noah Segan, playing stock types (the drama club vixen and the stoner who talks a good game) shine particularly in this.

And it's all put together with considerable visual flair and the kind of indelible sense of place that the great noir films had. Highly recommended. Go see it if you can.

Sadly, those of us who live in Flyover Land rarely have a chance to see cutting-edge cinema. Either it never appears "at a googolplex near me," or else it's here and gone in an instant. Denver boasts a downtown film center sponsored by the Starz cable channel, which is about the only place likely to screen this sort of fare. For example, a few years ago my wife and I saw the "Tosca" movie there, the one conducted by Muti, but it played for exactly one week.

Well, if nothing else, Brick has definite Midnight Movie potential, if you're near a university or something. And who knows, it might be a surprise hit.

I love a good genre-fuck.

Who knows where to download XRumer 5.0 Palladium?
Help, please. All recommend this program to effectively advertise on the Internet, this is the best program!