I was just reading on Wikipedia (yeah, I know) about Nureyev's partnership with Fonteyn. When they danced together in Giselle, "the applause from the audience lasted longer than the ballet itself." Well this is of course what came to mind: one hears from folks who went to the Met back in The Day that the ovations went on for hours, people jumping up and down on their seats, perhaps fans shooting themselves in standing room, having reached the edge of experience. But I trigress. (That's like digressing, but in more directions.) The question is: why, these days, are the ovations, perforce, so short? After about two curtain calls, the house lights inevitably come on, whether people are still shooting themselves or not. Is it just a matter of money? Have crowds become lacklustre in their divadienss, and the shouting isn't loud enough to justify another call? Does this happen differently elsewhere? No, seriously. I want to know. I do actually find it hard to imagine it being very enjoyable for fans or performers after maybe fifteen minutes, but the ovating at the Met truly rarely lasts more than five, it seems to me. The only answer that is forbidden here is, "Oh, there just isn't anyone worth shouting for anymore." Say that, and we are no longer pals.
Posted by Maury D'annato at 3:47 PM 16 comments:

Parterre has posted an obituary for Rose Bampton, but I've saved my words for someone who has nothing to do with opera.

A year out of college I worked in a bookstore because that's what you did in Austin. Downwardly mobile was the thing. Driving home one day, I had that NPR program on the radio where actors read short stories, is that still around? I'm pretty sure it was Linda Lavin who read Grace Paley's three page story "Wants," and pretty much ended my interest in the novel as a form. Paley put whole lives in these miraculously tiny stories. I've put "Wants" in an email more than once, because I wanted to impress someone, and because it didn't take long to type.

There weren't many of them. She had her art firmly in perspective, and what was more important to her, much of the time, was living her life and keeping up her anti-war activism. Apparently she was often to be seen on her corner in the Village handing out pamphlets like Grace Goodside from the Lower East Side, child of radical Jewish immigrants, rather than Grace Paley, beloved and influential writer of stories. She was 84, and had lived as one imagines she wanted to, but there's a certain bitterness that she had to die in this era, having thrown herself unsparingly into agitating against the war in Vietnam.

Paley was a casual linguist with no credential and a better ear than plenty who have one. There is Russian and Yiddish in her stories, and she mines each for its exact emotional content, the things that don't translate and show up only in a sentence spoken in English but thought in Russian. "Goodbye and Good Luck" is a map of starry-eyed regret, and equally of resourcefulness and wit, made perfect by its guilelessly precise sense of what it means to learn to talk about what's going on around you and sometimes talk your way out of it in one country and then, by necessity, in another. In with the bargain, Paley's insistence on looking at the hard part of everything and not blinking.

Immediately he said "Rosie Lieber, you surely got a build on you!"

"It takes all kinds, Mr. Krimberg."

"Don't misunderstand me, little girl," he said. "I appreciate, I appreciate. A young lady lacking fore and aft, her blood is so busy warming the toes and the fingertips, it don't have time to circulate where it's most required."

Everybody likes kindness. I said to him: "Only don't be fresh, Mr. Krimberg, and we'll make a good bargain."

I saw Grace Paley once, reading a story she wrote for The New Yorker in the last decade, at the Chicago Historical Society. It was, truth to tell, a bit of a rehash of older stories, not the better for time and wisdom. It didn't matter much. It was a joy to see her. Studs Terkel also appeared, and for part of the time they were both onstage, affectionately interrupting each other like the grandparents you'd have in a perfect world.

Someone asked Grace Paley to read aloud the little paragraph that serves as an epigraph to her collected stories. Coincidentally I picked the volume up off my shelf this morning and have it at hand. These are the words I got to hear her read aloud in her resolutely prosaic voice, the voice of a century of New York:

It seems right to dedicate this collection to my
friend Sybil Claiborne, my colleague in the Writing
and Mother Trade. I visited her fifth-floor
apartment on Barrow Street one day in 1957.
There before my very eyes were her two husbands
disappointed by the eggs*. After that we talked and
talked for nearly forty years. Then she died.
Three days before that, she said slowly, with the
delicacy of an unsatisfied person with only a dozen
words left, Grace, the real question is--
How are we to live our lives?

*a reference to the first line of "Two Short Sad Stories from a Long and Happy Life"
Posted by Maury D'annato at 8:23 PM No comments: 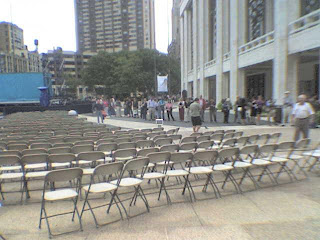 You had to believe some of them (well, some of us) were doing it for the ritual; come Monday morning, many of the same seats would be available and even the Fille, already very well sold online, isn't so sold that a day would make a difference. Here's a picture of the line snaking a little past the fountain after doubling back on itself five-fold inside. The whole ride took about four hours from fountain to "next Window, please!" All sorts were in line: hip kids, folks who probably heard Melchior in the old house (a woman behind us left after two hours and was asked why. She said, "I'm 85, and this is just stupid.") The usual crazies, people speaking every language though of course more than anything, Russian. The weather outside was foreboding but, for the bulk of the afternoon, pleasantly if strangely autumnal, a little like summer in the Bay Area. Ten places ahead of us, alone, a woman who looked awfully like Maribel Verdu. Behind us, a lovely gentleman who didn't seem offended when we admitted, after the expected opener about what all are you queueing up for, that one thing was Butterfly out of a desire to hear better singing on that magical set. Immediately in front of us I heard a young guy asking the man in front of him about Trebazonko (Ein schoenes war!) and calling his lady friend on cell when he found out half of it had canceled. If you were there in pairs, it was possible to sneak off for lunch, throw a few crumbs for pigeons until they became too assertive, but the guards at the door were on orange alert and would walk to the line with you and say "does anyone recognize this guy? Was he standing near you?" Just after 4, we left, poorer, but with plans.
Posted by Maury D'annato at 4:24 PM No comments:

Meanwhile, here's an approach to Erlkonig I've certainly never heard. I won't ruin the surprise for you.
Posted by Maury D'annato at 11:27 PM 5 comments:

What comes around goes around

I am now the neighbor nobody wants. I received a La Puma Gioconda as a gift and am now joyously playing it for all to hear, as I have had to hear their early morning right wing talk radio, apparently self-taught electric bass, and something that was either one intense S&M scene or domestic violence. Well, take that, neighbors! Learn to fear Olive Middleton! Interestingly, the Cieca on this seems competent, but she may be benefiting from drastically lowered expectations. If someone wished to hear a choice scene or two, all that person would have to do would be tutor me a little in file-sharing is all I'm saying. Well, it's time for everyone's favorite b-flat, so I should probably sign off in case I faint from the ecstasy of art. [Okay I had to check back in to report that, sweetly, the audience gave Madame Middleton a warm round of applause for her very heartfelt a-flat, a tradition carried into the present by fans of Ms. Millo.]
Posted by Maury D'annato at 6:21 PM 4 comments:

I shot it on the bias! It's artistic!

Too silly and delightful for me to bother much with an introduction. The other acts are on youtube but the filmic concept of the end of the act convinced me to post this one.

More tales from the "What Ever Happened to" Files

When I was but a wee thing, didn't know "Porgi amor" from Porgy and Bess, one of my role models in freaking the fuck out about opera--sort of incidentally the first person to play me Rosa Ponselle--was a delightful fellow who shares my first name (well, my real one) and whose uberdiva was Sylvia Sass. I think fondly of her both because he was so into her, went to a full run of her Toscas I think, and also because I've always liked her lispy lunatic of an Elvira on that one Don Giovanni. I don't know much of the rest of her output, but I'm curious whether she blew it out altogether or just never completely caught on--I think she'd have been pretty young still in the 90's and I'm pretty sure she wasn't singing anywhere, at least in the States.

A very devoted fan on YouTube seems to have posted rather a lot of her work, so here's a clip I liked. Talk of Norma is in the air anyway, these days, isn't it?