...the bartender asked Mrs. Parker, who (apocryphally or not, one never knows, and it doesn't matter) muttered: 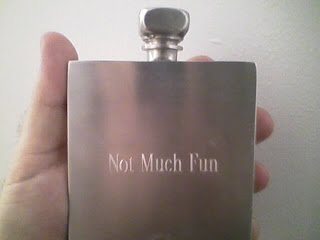 Yeah, that's my whiskey flask. I thought it'd be a nice inscription since I'm a bit of a downer, myself. As is [cue: relevance] the current run of Ernani at the Met, of which I saw approximately Erna this evening before giving up and hitting the subway. Not Erna Sack, mind you, or Erna Spoorenberg, or even Erna Schluter*, just the first two thirds of Ernani. I thought I'd explain that to death in case it was previously funny.

Ever your Closing Night Clara, I dropped in on a balmy Thursday night, found there were no rush tickets, and decided to leave. Except JSU all but double dog dared me to stay, and stay I did, until stay I didn't. It wasn't terrible or anything. It just wasn't much fun. The one trick I came up with is that, like iconography of the crucifixion, several entire acts of Ernani are more palatable if you pretend they are scenes where someone forgot the safe word. Some people like French maids; others like Spanish bandits. No, stop! The King I'm supposed to marry might hear us!

The rotten thing is I had been waiting I think 1.5 seasons (when was Cyrano?) to hear Radvanovsky. I've had stupid timing with her, and that's nobody's fault. All I've heard her do at the Met was Roxane, which isn't the best role ever, and once upon a time, the High Priestess (I wonder if Aida is ever tempted to say to her "girl, you high." ) which was mostly a promise of things to come, though truly I do know a number of people who heard it and said: this one's going to be a star.

Which she isn't, and I don't get it. Not here, anyway. She's a respected singer who gets here and there a starry assignment, which I have to think premiering Roxane opposite Domingo is, but then lately sort of this and that. B-cast for Trovatore, though some of us may think she's the A. Not to sniff at Leonora, but there's just something unspecial-feeling about this whole revival. Reverting to Fametracker Fame Audit terms, one is tempted to assess

Because what is it she doesn't have? The voice is objectively Met sized, which is to say anywhere-she-wants-sized. It has "face" as they say, and while the C+ top is a little funny, it's there for party tricks, and the normal soprano range is absolutely reliable, including a no-worries though not cavernous bottom. I think it even has an unobtrusive character-giving flaw in that once in a while in a predictable place, she flats, but not enough to ruin things. She doesn't sing as if she were trying to preserve her voice for 50 years, she moves well on the stage, and she is, as Enzo Bordello was heard to term her, a handsome woman.

So while I'm not one to apostrophize the Met, get with it, Met.

As Leonora or Elvira or Jenny or whatever the heroine's name is, it must be admitted, she did not seem 100% cast to her strengths. Here and there her sound forcibly livened one's pulse, but...maybe I just don't love Ernani, in which case there's not a lot of sense reading this review. Or maybe it's that nobody was cast quite right.

Not that the audience agreed with me much, by the sound of it. Giordani, who I thought only lived up to some of his recent performances in the cabaletta at the second curtain, sung with a swagger and a lot of ping, was given the hero's welcome, and I won't be so condescending as to put it down entirely to the "oh look, a tenor!" effect. To me, it was 3/4 of a good performance**, unignorably weak in softer moments, with one or two small-scale wrecks. He's been sick, I guess, but really this is not the rep in which he's such an asset to the house. The volume is appreciated, as is the ardor, but it's music that gets mauled if you sing it a certain way, and some of the time, he's guilty of that.

The house was very warm as well to Furlanetto, who maybe had a touch more growl than I'd have wished for (isn't it Tozzi on the old RCA? Well nevermind that game, and anyway I just looked and it isn't) but bluster notwithstanding, it was certainly a vital and Italianate reading.

Listen, I'm trying not to be a dick about Hampson. If you haven't had your hands over your ears, you know he's not really my speed, but I guess this evening it was basically an appealing sound, and he didn't Shatner around too much (Jonathan von Wellsung still does a deadly imitation of the croon at the end of the big Boccanegra duet) and I guess I don't have anyone in mind who would have done it a lot better, and in the interest, aforementoned, of not being a dick, I'm not going to sit here and try to come up with a list. Just, even where the gestures were the right ones, or in the right direction, it wasn't lit from within, is all. Well, I loved him in Parsifal and am sure I'll love him in something again. But not in this.

Thus begins my lunatic weekend of opera-going. Tomorrow is Satyagraha (how could I passively resist?!) and Sunday is Edgar, which is an opera, not kidding.


*Stewball did I totally just steal your line? I'm pretty sure you joked about the Erna Trifecta. You should sue me, we can maybe have cocktails after.

Tomorrow is Satyagraha (how could I passively resist?!)

I'm looking forward to Satyagraha tonight as well. I only know the work from the Sony recordings of the Glass trilogy, which I liked a great deal. I don't know how much of it is the work, and how much Douglas Perry's beautiful limpid voice (which I'm trying not to remember too much of as I go into the theater tonight). We'll see.

Well actually there are four Ernas, so it's whatever a trifecta is when there's one more component. One you get the rhythm right, this is a very effective means of zoning out on a treadmill, thought I think it might also be just the thing with a little Be-Bop Combo (as we used to say on 32nd Street).

And yes, I did have to look this up.

you didn't catch Sondra in Don Carlo a couple of seasons ago?

Stewball: I believe it's the jaunty "hey" tacked on the end that makes it.

anon: sadly, I didn't go to that Don Carlo. I can't remember why, unless I didn't live here yet. It's a role I'd be very interested to hear her in.