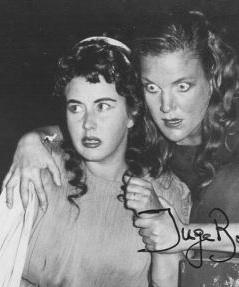 We hear from an intensely critical source who would not say this kind of thing if it weren't true that none other than Jane Eaglen sounded like a million bucks singing from Salome on a broadcast from the Proms. Now, we don't know anyone who likes Eaglen, and can't imagine how such a thing could happen, but seriously, the friend who said this? Very hard on singers. I'm not sure why I just started we-ing, but I think I'll stop. "We hear" just seems right for this kind of thing. Well, here's hoping it's true, and something has erased the last years of lazyness and workmanlike singing. Nobody wants a high quality big voiced soprano on the scene more than I do.
I ran this by the editor over at trrill (golly it's hard to remember who in the blogosphere uses a real name and who doesn't, best to err on the side of discretion) who would have none of it. Now, said editor is of the school of thought that a good voice is a good voice regardless of rep, that fach is a very overplayed idea. I'm on the fence about this, but if he's right, then it can't just be that Jane was somehow unsuited to Wagner, and anyway I just remembered I actually own a disc of JE singing the Four Last Songs that squarely refutes any possibility that Strauss brings out her musicality. "Awful" does not begin to...
Meanwhile, it is being said on opera-l that Fleming in some interview or other ruled out, and I'm not sure whether this was explicit or implicit, singing such roles as Ariadne and Chrysothemis. Me, I find this heartbreaking. It's just what I'd like to hear her do. I have some sort of baseless certainty that singing things a bit wilder than her current rep might shake some high spirits into the gal. And I've always thought della Casa's Chrysothemis was lent a certain vulnerable beauty by the fact that it's just a bit out of reach for her. Chrysothemis [oh hey, bit of trivia: is her name ever spoken in the opera? Hint: the answer is not yes. Because that wouldn't really be a good trivium.] is one character who should not necessarily sound assured.

Scratch that. I'm talking out my sleeve. I didn't exactly have a lot of complaints about Voigt. But let's just say solidity is just one viable option.
Posted by Maury D'annato at 4:20 PM

Very cool of you to let us post to your blog. If you are interested in making $3,000 or more per week please check out my home based business website. Thanks again and take care!

There was definitely no Strauss opera broadcast from the Proms this year -- was this a recording from years past? Or broadcast from... somewhere else? Not that it matters, so much...