IM IN UR OPERA SINGIN UR NOTEZ 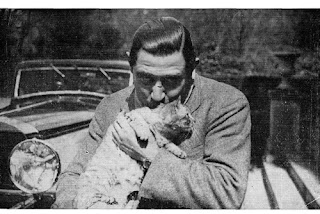 Georges Thill loved cats, it seems. This is only one reason to adore him.

Hat tips to Greg, who finds these things in places you and I would not be likely to look.
Posted by Maury D'annato at 4:06 PM

Is it just my imagination or is the cat not really loving Georges back? But damn the man could sing.

Ditto on that man's singing...an absolute favorite of mine for years. In the Jan Schmidt-Garre documentary "Belcanto: The Tenors of the 78 Era," there is priceless footage of Thill singing an aria from Canteloube's "Vercingetorix" (an opera with more ondes martenots than Messiaen's St. Francois, I believe) with the composer (wearing a monocle that pops off at the end) at the piano.

Thanks for the wonderful photo, Maury!

Have you seen My Favorite Intermissions? My husband found a link to it on boing boing, and I thought of your blog.

Cerf: without my vast network of sources, I am nothing. And by vast I mean 2-3 people who sometimes send me stuff.

I'd be curious to see the crazy clip you describe. What I'd really love to stumble upon, though, would be his "Inutiles regrets." Or more of Troyens, if such there be.

Elaine: funny, no, I hadn't seen it. I wonder if he's cribbing from the same place I am--My Favorite Intermissions is the title of a book by Victor Borge that reduced me to helpless hysterics when I was 16 or 17, reading it in the stacks at a university library in a smallish town in Kentucky. These days I find it more just charmingly silly, but it seemed like a nice name for the blog anyway.

"Inutiles regrets" is his only recording from Les Troyens, as far as I know, but I'd love to find out I'm wrong. It's on the EMI CD of his French arias and the sadly all-but-impossible-to-find 5-CD set EMI released for his centennial, but it might show up elsewhere as well.

I love this guy -- one of a kind. Even more elegant and beautiful than Kraus, which says a lot.

ArkivMusic has a seven volume set in stock, as well as other compilations. Don't know if this is the centennial mentioned above, but it is pretty comprehensive. Here's the link:

According to the discography contained in the very same fan-pamphlet from which the kute kitty photograph is taken, Thill also recorded "En un dernier naufrage" from Troyens released as the (literal) B-side of "Inutiles Rregrets."

Lots of reasons to love M. Thill beside his love for cats which cuts a lot of ice with me. Looking back in old age, he could with perfect justification have paraphrased Norma Desmond with "We had ELEGANCE then!"

Thanks, Greg! On the EMI releases, "En un dernier naufrage" is combined with "Inutiles regrets" into one track. Sadly, it seems that that's that for Thill's Troyens, but on listening to it again...wow, Will is right.