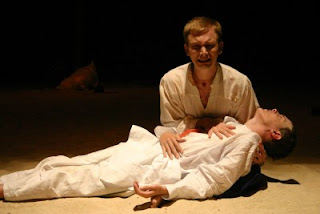 Once in a while Events of Note are brought to my attention by people involved, and my first response is "you have clearly mistaken me for someone with a Vast Readership," and then once that's on the table, I check it out and see if it's something I'm actually intrigued by because it seems cheap to get up on this, my very low rooftop, and yell to the heavens (by which is meant internets) about something I wouldn't go to myself.

Well this one looks good, so here I am on the rooftop. B.A.M. (in the Borough Adjacent to Manhattan) is putting on something called David et Jonathas, and I'm not going to pretend I know heaps about it, humming it quietly on the subway, but it's by the same composer as the version of Medea in which the great LHL had one of her triumphs, and the production bids fair to be good theater rather than stand 'n sing. A little bird tells me it is "incredibly compact dramatically" and through-composed in the way of the Gluck-Wagner lineage.

American Opera Theater sounds to me a little like a D.C. version of Chicago's excellent Chicago Opera Theater, a company that does what City Opera did once upon a time before they became largely irrelevant. That is: rep the city's main opera company won't ever do in thoughtful, smaller-scaled productions.

Performances are May 9 and 10 at the BAM Opera House. You can find out significantly more than I'm able to tell you at the blog written by the company's director. The latest entry has to do with 17th c. France and teh ghey. What's not to love?
Posted by Maury D'annato at 8:40 AM

Is the appropriate wish for someone preparing for a run in opera "break a leg".... I don't think it's "good luck" as that would be the worst thing you could say to someone in musical theatre... whatever it might be, I hope the performances are a success.

Getting ready to premier my own works in June I'm feeling the agony of preparing for the performance.

I guess I missed something along the line--I've never felt NYCO became irrelevant. Yes, they do their own schedule of Carmens and Bohemes because one has to to keep an audience. But I've also been very happy to have The Visit of the Old Lady, Mathis der Mahler, lots of Handel, Mourning Becomes Electra, a bunch of world premieres (never mind that many of them will never be seen again), Margaret Garner, Dead Man Walking, Lizzie Borden, Die Tote Stadt, etc. etc. That's all rep the big house will never do and for the most part, NYCO did--and does--it well.

Well, in any event, it is going to become a company that does extremely adventurous productions in challenging high quality productions until the brilliant Mortier...and hopefully change some things across the plaza at the snooze palace :-)

I, should have mentioned that this production at BAM looks great - I won't miss it!

AOT is reviving its 2005 production of this work, seen in Baltimore. Director Timothy Nelson described that first run as a workshop, but it was more than that. Don't miss this, if you can see it in either Georgetown or Brooklyn. This company has done some interesting work.

To follow up on what Will said, sure, City Opera has had a dull run under the Glimmerglass Gang, but when the late, extremely gorgeous Christopher Keene was in charge (and before) they were light years ahead of the singer-oriented museum across the plaza in terms of doing interesting things.

I'll note just a few of them:

Ginastera's fantastic Bomarzo, with Placidio Domingo, before he went on to waste his time singing Verdi and all that

Henze's The Young Lord with Rudolph Bing as the old man

NY premiere of Akhnaten, which I think is better than Satyagraha

US premiere of Janacek's From the House of the Dead

A stunning production by Achim Freyer of Moses und Aron--penises! on stage! at NYCO!

etc. etc. The company may have lost its way, but Gerard Mortier should work wonders there.

Just to be clear, almost all the productions that Will mentions in his favorable comment were during the time of what Mr. Holland sneeringly calls the Glimmerglass Gang : "lots of Handel, Mourning Becomes Electra, a bunch of world premieres (never mind that many of them will never be seen again), Margaret Garner, Dead Man Walking, Lizzie Borden, Die Tote Stadt"

I would also add Paul Bunyan, Turn of the Screw, Tan Dun's Marco Polo, Orfeo and Euridice (with penises! Mr. Holland -- you seemed so concerned) Platee, The Mother Of Us All, Ariane et Barbe-Bleu, and others.

The incoming Mortier regime may indeed be fantastic, and surpass the last ten years. But before we start passing judgments, please no amnesia.

Anon, fair enough with your last graf and I shouldn't have snarked at the Kellog era like I did, but the operas I listed were in comparison to the Met, not the City Opera's past history. Even then, comparing the truly radical stuff that Rudel and Keene did with the utter pap that is stuff like Dead Opera Walking isn't fair.

To be fair, I live three time zones away from Manhattan, so I haven't been to NYCO in a few years (a weekend trip to see the Dukas, which I thoroughly enjoyed), I was simply going on what I've read in the New York papers, arts journalism online, classical/opera blogs and so forth to characterize their recent past as "dull". Certainly, the press coverage of Mr. Mortier's hiring painted the NYCO as a place in a need of a shake-up.

See, for example, this thread at Parterre Box for comments along those lines.

And from another Mortier-centric thread at PB, someone with the utterly improbable name of Maury D'annato wrote:

Handel is clearly pretty love-it-or-hate-it, but the thing I certainly won't miss is the production style that has become universal in NYCO's Handel outings. Faintly modernist whimsy gone at least half stale is the best way I can think to describe it. Can't think what to do to keep the audience's attention during the B section of the aria? Lower a large swordfish from the flies! Can't think how to keep the musty characters in a Handel libretto fresh? Put them in sunglasses and surround them with paparazzi! It's gotten pretty color-by-numbers.

I remember a hideous production by European Youth Opera of Lucio Silla, by one Brigitte Fassbaender, which I saw in Norwich about ten years ago. It was riddled with precisely the kind of 'Oh shit, this is Opera Seria, what are we going to DO?' twitches that are outlined in the previous post. My major memory is or tea being poured throughout the orchestral intro to 'Ah, Se il crudel periglio'. Nuff said.

The Hytner Xerxes shows what to do with Handel- respect the music and take your cue from there. Ann Murray throwing statues to the ground during 'Crude Furie' fits the music, the drama and even has a good and appropriate gag as its payoff. And by the way, anyone who has that DVD, or the ENO Rigoletto, and who can tell me why it was that Jean Rigby didn't have a major career will earn my unending gratitude.

Henry, I learned a long time ago that you have to see a production yourself, in the theater, before you know what it is. We all attend with our own background of personal associations. I've been to productions people raved about and have been left cold--and the opposite is also true. Relying on the critics (particularly at this time of severely degraded critical standards) is not helpful at all. I always told my students, "don't write the review before you've experienced the actual production.

As to "Dead Man Walking" and other operas that either didn't impress or that don't survive, it is still essential to do new work. I think the myth has developed that in the "golden age" (whichever of the many golden ages that is being referred to that isn't what we're experiencing at the moment) every premiere resulted in a deathless masterpiece. I'm going to bet that if you could put together a list of all the operas that premiered at
the the major opera houses of Italy in any given year in the 19th century, you'd find that no more than one of them--two at the most--are even known today, let alone performed regularly.

And let's not forget the many, many works we hold dear, and wouldn't think of being without for even a season, that began their lives as failures.

Oh, but lets not get off point. Come see this opera - I promise you will love it and be glad you did. It is a piece that should be in the repertoire of every modern house. (sorry for the friendly, though overt, reminder!)