Here at MFI, we like to stay open on major holidays in case it's not your holiday. Nothing's so dull as finding everything closed, tout le monde indoors celebrating whatever their perception of the holiday's meaning happens to be (I think we've all grown up past believing the nice pilgrims and the nice natives collectively revved up the can opener for the tubular cranberries, but the gesture of thinking what you have to be content about is a good one in inwardly- and outwardly-directed ways.)

The truth is, though, I haven't gone to anything in weeks now and I have little to entertain you with. I did, on the bus down here to DC, come to the ipod-fueled realization yesterday that no matter how much of her I have on my ipod because she's the kind of thing I should adore based on everything else, I'm never going to love Emmylou Harris in that visceral way...but that's about my only musical thought in the last few days. So instead I'm going to go on about nothing for the benefit of the truly bored.

I guess for the sake of a shallow joke I can snap in place a phone photo of some ecrevisses pas du tout a la bordelaise from the seafood stand on the Potomac. God I hope the ecrevisses don't actually live in/get fished out of the Potomac. Uh huh, I've gotten obsessed with that menu. I swear one day I'm going to have a Vanessa themed dinner party, hopefully not ending with a spontaneous abortion in the woods. Now all's I need to do is learn to cook. 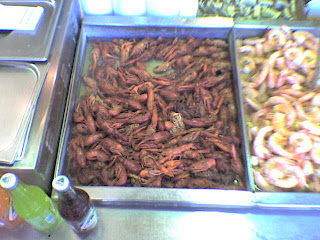 Here's a recipe from some crayfish-centered site.

This is the traditional French recipe for cooking crayfish which are served whole and unshelled. The dish can be prepared the day before and re-heated gently. To serve 4 people
Ingredients:
12-16 whole crayfish
3 cup of dry white wine
4-6 carrots
2 tablespoons of tomato paste
4 onions
8 tablespoons of cream
300gm butter
Salt & pepper
8 sprigs parsley
Cayenne pepper to taste
2 bay leaves

Method:
Chop vegetables into thin strips ( julienne). Melt butter in a large pan and simmer the vegetables and herbs until the former are soft. Add the crayfish and cook over high heat, stirring continually until the shells are red. Add the win and tomato paste and boil gently for a further 15 minutes. Add the cream. Take off the stove and season to taste.

My favorite part is "add the win." I have a feeling with my cooking skills, I would not be adding the win. Say, look [he said, editing later]: La Cieca, too, is having a culinary moment. In the part of the world La Cieca and I hail from, you know, ecrevisses are known oh so elegantly as "crawdads." Well, you can just think of us as the Giada di Laurentis and Rachael Ray of opera, for today. (Sue me, I picked the cute ones instead of the ones who make anything interesting.)

Aright. Enough. Have a great holiday if you're doing that, and if you're not, I hope something else good happens today.

ETA: here's something else good, in case nothing else came up of its own accord. Who wouldn't feel a little grateful to the universe for this?

"Find something better than that!"

In Maury's heaven, Lucia Popp will sing Vanessa. Thanks for being open today!

:) happy holiday. thanks for being open. and you're in my hood! enjoy DC -- it just got really nippy (boo!)

"Find something better than that," indeed! Can you imagine having your long-lost boyfriend over to an intimate dinner, and then serving the messiest dish imaginable, i.e., unshelled crawfish in a red sauce? (And, let's face it, fresh crawfish from Sweden in the middle of the winter -- they would be about the size of gnats...)

Thankyou for posting that video. I don't even need to play it, I know what it is by the sparkly butterfly top. I was raised watching that performance (and the rest of the gala it's from) and it is just the most magical thing.

Oh and I feel exactly as you do about Emmylou.

What an exceptional gift to give us for the Feast of Santa Cecilia - thank you.

Once upon a time many years ago I went on a camping trip with my brother. He being a right wing policeman, and me being a Berkeley grad opera queen, we did not connect on many levels, but this was something we had done in childhood with our parents and continued to enjoy. So camping with him, my nephews, and my partner somehow inexplicably seemed to work. He was a country music fan and one night on that trip he played Emmylou Harris. Granted there was a good deal of brandy involved, but when she sang Coat of Many Colors, I cried like a baby.

So you might want to try not bathing for a week, building a campfire, and getting drunk with a Republican, and then give her another try. It worked for me.

Oh, and might I add that MFI is something continually worth thanks and gratitude.

Alex, it was indeed peculiar weather. Ah well, a single warm day helps me keep my sanity, such as it is, through the winter a little.

Cieca: gnats!! Also you're quite right--short of making some Swedish variant on fajitas, could they have chosen something worse for a first date?

Sarah: the butterfly top really is a shonde.

There are some Emmylou songs I'm fond of, but she's no Lucinda Williams, vocally or in terms of songwriting.

Winpal: hey coincidentally, that's how I got into Leyla Gencer. Oh, I kid!

Unrelated (except it brings together Vanessa and Christine Brewer, who are featured at the moment at MFI), but have you run across this? Apparently a discussion with Ms. Brewer re: Vanessa in anticipation of her appearance in the role at the Barbican. http://www.bbc.co.uk/radio4/womanshour/2003_45_wed_02.shtml

Don't know if it's still up as am at work and don't have realplayer, but thought I would pass it along.

After viewing that picture of trayfe chazzerei, all I can say is -- "Oy!"