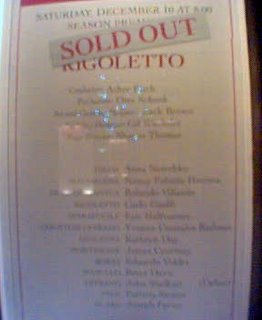 I auditioned several headlines for this, and liked, "Blind Item" best but then I was afraid you'd get your hopes up that I had some good dirt--which wholesome looking baritone fresh from success in a new American opera was seen making out with which prolix and occasionally too vulgar opera blogger under the Ponselle portrait at second intermission or something like that. (I suppose that would be less blind and more near-sighted, in need of a good squint.)

Well. My tickets, bought at the very end of the mad rush when there were a few left, were for Tuesday night. And then I started getting all tied up in knots about consistently having blug things after all the other lads and lasses blag them. The things I do for you kids. All, uh, twelve or thirteen of you, I'm guessing. I bought a score desk ticket. What that means is you go aaaaaall the way up like you were going to Family Circle, and then you go down the side where the family circle tickets that are slightly cheaper because the view sucks are, and then you wave hello at that person whose view sucks, cast a furtive look of envy and despair at him, and sit at a little desk beside him where the view? She done gone. Like, entirely. You have a little desk with a light in case you are the rare scholar that bought score desk because he wanted to follow the rich counterpoint of the Capriccio sextet, and then what you do, having put your coat on the score desk, is more or less the equivalent of listening to an exceptionally well mic'd live recording. (Oh, hey! Blind item! What purveyor of live recordings whose company has the funniest habit of changing names a lot was seen in Fam Circle last night, leading us to believe that a souvenir of this event will be coming soon to a website near you?)

It's actually a very peculiar sensation which is why I'm glad the fellow in the Lousy But Existent View seat in front of me went and found a less lousy seat at first intermission. And the guy beside me found one for the first scene until he was kicked out of it by people with a lot of gall and, yeah, tickets to sit there, so I basically only missed the scene at Rigoletto's house. Did it ever occur to anyone that Rigoletto goes in the list of characters whose names we never learn? Because I'm pretty sure Rigoletto isn't really his name. I'm just saying.

So first I can see: hello, trusty old hideous Otto Schenk Met Rigoletto! How's the drab, unimaginative eyesore business? Why, I haven't seen you since Vargas and Rost were respectively champagne and chloroform on your well worn boards. And Villazon makes his entrance and, old fashioned that I am, I'm hoping for entrance applause but it doesn't happen. (I get that it disrupts the music. I sort of feel like in Verdi and other stoppable/startable lego-like operas, this is not such a huge crime.) Villazon's voice, in the last negative comment I will make about him, is maybe a size smaller than I was expecting, damn the studio. The Duke doesn't have opening lines that tell you much, and Eduardo Valdes as Borsa actually does have kind of a meaty voice, so it was a moment of doubt. "Questa o quella," came off as a job interview, a good pitch but a little bit tentative. Fortunately the crowd went tenor-assuringly bonkers anyway and next time Villazon had a big scena, the jitters were gone, and by the time he got to "Possente amor," he tossed it off with the swagger of the guy who knows he got the job.

I give credit for swagger alone, but in this case I don't have to. Pretty much everything that was promised in the recital discs is there in the house. The voice is aural cake, and the technique suggests there's enough for everyone. Did I seriously just write that? I'm just flailing around for something more interesting to say than: go! Go hear him now! He's just what we all wanted! But I think he may be. There's stimm and kunst, messa di voce and punch-me-in-the-stomach-and-see-if-I-stop-singing high notes, a few weepy glottal attacks and a few syrupy portamenti but not too many. He moves well, he's less funny-looking than in some photos. I. Am. A. Fan.

Anyway his first scene ends and my row-mate returns, having fallen prey to the ushers, and I am plunged into darkness. So my first impression of Netrebko is 100% aural. Which is kind of ironic in the Morrisettian sense of not actually ironic but sort of annoying. Because, maybe you've heard? She's pretty. And, as I will find out later on, quite a compelling stage presence. The voice itself has presence in spades and several other suites. Much, much fuller and pingier than I was expecting, probably because of the way she looks. It's also weirdly covered in places, extraordinarily solid at bottom, and deployed from time to time with a certain insouciance about pitch. If you're hearing mixed feelings, you're hearing right. I found her Gilda overall quite exciting, but not without worries. She pulled off the trick of making Gilda tragic instead of just infuriating. She beguiled in Caro Nome. This is all good. She also went for the e flat we all love in the vengeance duet, and in her enthusiasm, added just a leeeetle extra flat to the e. At which point she put the unwritten high notes in the garage for the evening, not to appear for the quartet (ruined by jerky conducting, by the way) which I'll admit is one place I get all disappointed at the lower option. So the short version of this is: I'm still making up my mind for myself, but last night certainly had the feel of a Sternstunde.

We're all used to the fact that the title character in Rigoletto is most often an afterthought these days, so it shouldn't disappoint anyone horribly that Guelfi was basically ok, big voice, lots of lurching around. You know, though, the one time I heard it sung, but sung, the big guy given some vocal class courtesy of Mark Delavan, the whole show worked better as a theater work one could care about. Guelfi's reading was just a little too woolly and reliant on occasional shouting for me. [Edit: having read the Wellsung review I am wondering if I've been too uncharitable. I'll decide on Tuesday.]

Eric Halfvarson is a very high quality Sparafucile, and it suddenly occured to me I never hear anyone talk about him much. James Courtney was not always audible, but Monterrone's scene is one conductors love to bulldoze, and what you could hear was good and solid.

Blind item: what amateur reviewer is at this point not going to anything new until, like, Wozzeck unless maybe, maybe to catch the last Fillianoti-abend or Feldermaus if he can bear it?
Posted by Maury D'annato at 10:39 AM

Halfvarson was easily the best thing about the NYCO horribly misstaged Capriccio. He's shorter than I thought he would be.

But were your mother-of-pearl-encrusted opera glasses powerful enough to answer the most important question about Villazon? What were his eyebrows like?! Enquiring minds!

But I beg to differ about Villazon: his breath lets him hold them forever, but his high notes still lack force and ping. (Ugh! I'm sounding like your Mystery Pirate.)

Ms. Monster: is he really? His singing sounds tall. Plus unless I'm mixing up my visuals and thinking of Marullo, they have him kind of duded up as a leather daddy. Though I guess they have short leather daddies. What the hell am I talking about?

G: Sad to say, they have gone to opera-glass heaven. I now use a sportier, more prosaic pair. A full report on eyebrows will be submitted Tuesday, but I'm guessing "prehensile" may be an apt descriptor.

Do not deny that you are a blogstar, child. At least in my eyes.

At least in my memory, one thing hops out as "Wow, he really *is* shorter than I thought he would be". You are correct in saying that he sounds tall.

I agree with your review there, JSU, although I'd add even more gripes about misreadings of Strauss in there (what kind of moonlight is bright gold? what part of intimate chamber finish does the director not understand?) La Roche is the actual hero of the piece and has always been, in the years which I've known and loved Capriccio.

Mezzo G: Blogstar!!!
Hm. Where's my limo? I feel like I should have a limo. Full of hookers maybe. I mean, it's no big deal. It could just be a plain old limo.